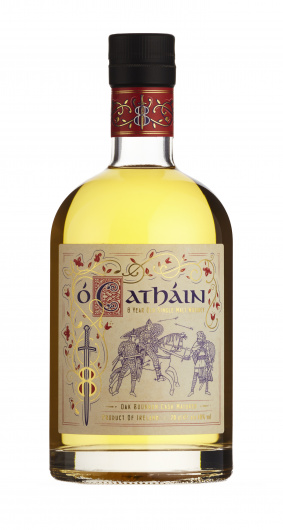 With a nod to the Irish heritage of the Awin family, we are pleased to offer Ó Catháin (pronounced O'Ca-han) an Irish Whiskey gently distilled in the North of Ireland. This 8 Year Old single malt whiskey has hints of honey, warm vanilla and spicy oak and an exceptionally smooth finish. Enchanting when served neat with a little water to "open the door" but equally pleasing over ice or in cocktails.

The Ó Catháin’s were widely known as the warrior clan of Ulster. A fitting name, given that it derives from the Old Irish word for Battle. On May 14th 1260, this warrior clan came head to head with the mighty Normans in the infamous Battle of Down. Armed only with immeasurable courage and their finest tunics, beautifully embroidered and dyed with saffron, they were vastly outnumbered by the ironclad Norman army. Sadly bravery alone was no match for their heavily armoured opponents. No less than 15 Ó Catháin chiefs died honourably in the battle that ensued. The true victory however, lies in with the descendants now known as O’Kane and their fine triple distilled whiskey. A legacy to be proud of.

This whiskey was selected by and bottled for descendants of the Ó Catháin clan.