Vintage 2020 at Herdade do Mouchão 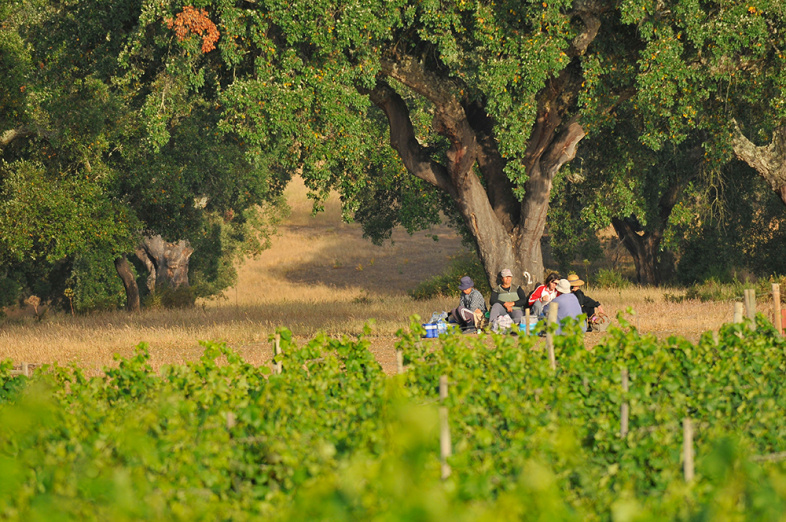 Confirming the tendency of last years, the 2020 Vintage began earlier than what was consider normal in Alentejo, at 17 of August we started by piking the white grape Fernão Pires and the vintage was carried up to 8 of October, taking us to a 56 days Vintage, one day longer that 2019 Vintage.

The average temperatures where above average of the last 30 years, and the quantity of rain was also higher. In the last quarter of 2019, about 43% of the total rainfall for the 2019/2020 agricultural year occurred.

Again, more rain than last year, but at the same time with higher average temperatures than the previous one. It rained at this stage 103.5 mm (17% of the total).

Average temperatures of the final and initial phase lower than the average of the last 30 years. The levels of precipitation where the double of 2019. The combination of spring rains and high relative humidity, where a forecast for higher diseased pressure on the vines at 2020 Vintage.

Hot summer and practically without precipitation. July was a warmer and drier month than usual, with the average of its maximum daily temperatures being 37.5ºC. On the 22nd and 23rd of the same month, a heat wave occurred that caused slight losses of production mainly.

It is probable that the pressure of the high levels of temperatures in July, was the reason for earlier Vintage, at least to be earlier that we expected, considering the Spring.

By the end of summer, we had some days with rain in consequence of a storm, this event forced us to stop vintage for few days, before the end of vintage.

The Global Solar Radiation [kj / m2], have been practically the same as those recorded in the past campaign (-0.2%), practically equaling the average of the last 17 years.

Probably as a direct consequence of the higher level of precipitation we had a slight increase on the production, breaking the cycle of the last 5 years, where we were losing production every year. This increase of production has been more notorious on the white grapes than the red.

The differences between grapes variety, explain the different results on the ripening behaviour, in deed grapes that are normally earlier picked, like the Trincadeira and Touriga Franca (also the white grapes) show very well balanced and even ripening, translating to wines well balanced, very varietal, good colour and natural acidity.

The heat wave by the end of July and also the rain at September, increased the pressure on the ripening of Varieties like Castelão and also Alicante B. forcing us to wait, even to stop the harvest, to pick the grapes at is best. The ripening was more heterogenous in this varieties, resulting in an average year on quality, with exception for our top-class vineyards (Carapetos and Canas) where the deep soils, well drained and natural capacity to provide water to the plants, helped to buffer the year, delivering once again, top Alicante B. grapes.

The 372 grapes intakes made during the 56 days of vintage, where the natural reflection of the pressure of this year, aiming for the best quality possible from all our parcels. As a consequence, 2020 delivered above average quality and quantity with wines that have concentration and good acidity, that will provide the capacity to aged and grow for the years to come.